Geshe Phuntsok Tsultrim is Chenrezig Institute’s resident Tibetan Buddhist teacher and is immensely popular for his warm-hearted, outgoing, caring nature and his practical, accessible presentation of the Dharma. He continually inspires our community by the example he sets both inside and outside the gompa. We are most fortunate to have this precious teacher living here at Chenrezig Institute to directly transmit the Buddha’s teachings to us via the unbroken Mahayana lineage.

Geshe Tsultrim was born in Tibet in 1969 and ordained as a monk in his homeland of Lithang at the tender age of 13. He made his way to India aged 18 as a Tibetan refugee and enrolled at Sera Je’s monastic university, which was re-established in India after His Holiness the Dalai Lama and Tibetan refugees fled their homeland following Chinese occupation. Sera Je’s history dates back to the early fifteenth century AD and it is recognised as one of the largest and most prestigious monastic institutes of Tibetan Buddhism in the Gelug tradition of Lama Tsongkhapa.

After many intensive years of advanced academic study Geshe Tsultrim was awarded a geshe degree in 2005 (in Western terms, equivalent to a doctorate). Research continued with a year of tantric study at Gyume Tantric College, followed by appointment as teacher of Buddhist philosophy at the Tibetan Children’s Village School, Bylakuppe, South India, which has the largest concentration of Tibetan refugees in South India. Following this two-year position, Geshe Tsultrim returned to Sera Je Monastery to become part of its administration.

Kyabje Lama Zopa Rinpoche specifically chose Geshe Tsultrim to be resident teacher at Chenrezig Institute, Australia and in 2014 Geshe-la made the long journey to teach on this distant continent, so very far from home. Just before leaving, Geshe Tsultrim taught at FPMT’s Root Institute in Bodhgaya, the most blessed place in the Buddhist world, where the Buddha is said to have meditated under the bodhi tree for 49 days and attained enlightenment.

Geshe Tsultrim teaches our renowned In-Depth program for Sangha and advanced students, teaches the twice-weekly general program for the public, conducts weekend courses and is an integral part of our traditional annual lamrim retreat. He is enthusiastically involved with the development of the centre and is always present and active onsite when work is taking place.

The beautiful Nalanda Masters Garden was Geshe Tsultrim’s vision for Chenrezig Institute and his heart project. Once a simple area of lawn, thanks to Geshe-la’s inspiration, the area has now transformed into the tranquil home for the 17 Nalanda pandits, as well as Lama Tsongkhapa and the Fasting Buddha, all of which are hand-carved from marble. The garden has become a central gathering place for special occasions and holy days and has been wholly achieved by Geshe Tsultrim’s single-minded commitment and dedication, supported by donations, benefactors and volunteer workers. Countless people now and into the future will benefit each time they walk through the garden and pause, all thanks to Geshe Tsultrim’s great kindness.

Geshe Tsultrim is a keen cook, well-known for his delicious Tibetan momos and can often be found in the Big Love kitchen making food for the volunteers. 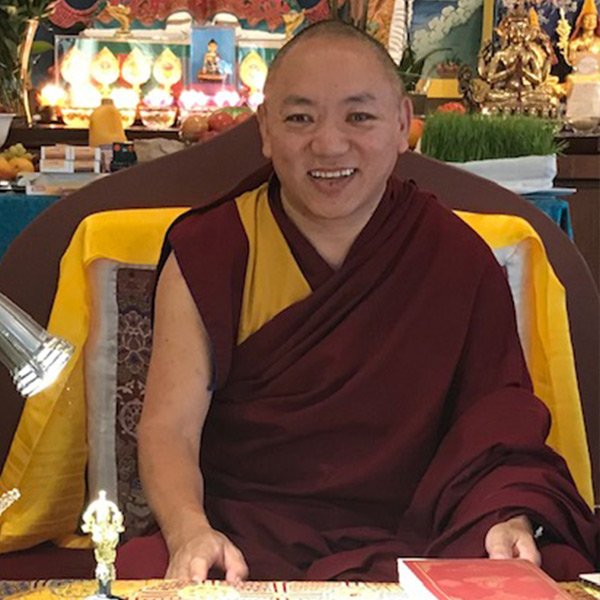 Venerable Kartson is Chenrezig Institute’s translator of Tibetan into English and the skilful interpreter for our precious Tibetan teacher Geshe Tsultrim. Venerable Kartson’s generosity and expertise in language mean that teachings direct from the Buddha and Mahayana lineage are available to us all.

Venerable Kartson is multi-lingual and studied conversational and classical Tibetan in India for four years before joining Chenrezig Institute in 2005. He has an academic and comprehensive understanding of the Dharma having worked closely alongside our resident geshes for over 16 years, and has been instrumental in opening up the Dharma to thousands of people during this time. Venerable Kartson has also translated for visiting geshes and high lamas here at the centre and overseas, including His Eminence the 7th Kyabje Yongzin Ling Rinpoche.

Venerable Kartson successfully completed the advanced Buddhist Study Program as well as the Madhyamika Studies component of the Master Program. He was appointed tutor for the advanced study program in 2015, instructing and guiding students in complex traditional texts and advancing their conceptual and philosophical understanding of the Dharma. In addition, he leads regular meditations and facilitates an online international Dharma group. He also keeps busy teaching courses and sessions during geshe breaks.

Venerable Kartson’s extensive knowledge of the Dharma, sense of fun, warm and lively style and easy rapport with everyone he comes into contact with make him a very popular part of the spiritual program. 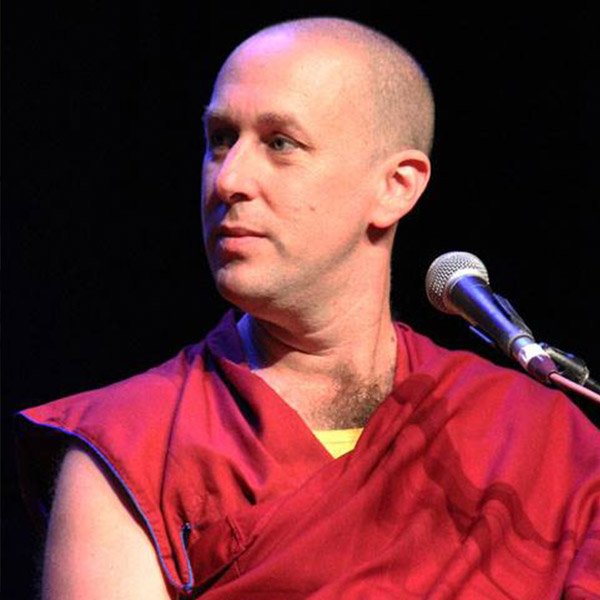 Tony Beaumont set off on his travels to South East Asia and India in the mid-seventies aged 25. With around 30 different jobs under his belt at that point, it was time for a break and to go exploring. Kopan Monastery became one of his destinations and so, most fortuitously, his path into Buddhism began.

He attended Introduction to Buddhism, the now well-established month-long course held at Kopan, where he met Lama Yeshe and Lama Zopa Rinpoche. Venerable Tony remained in India and Nepal, intensively attending group courses and retreats for a full year before returning to Australia, where he embarked on a career in the health profession, training and then working as a psychiatric nurse.

In the early eighties Venerable Tony decided to volunteer at Chenrezig Institute to experience life in a Buddhist community and to continue to learn the Dharma. It was supposed to be for a year, but he stayed until the end of the decade, participating in all aspects of the centre and undertaking diverse roles, including cook, receptionist, gardener, and director. Shortly after his time at Chenrezig, Venerable Tony ordained as a novice monk at the place where it all started, Kopan Monastery.

Venerable Tony took novice monk ordination with Kirti Tsenshab Rinpoche at Kopan in 1991 and full ordination in 1993 with Geshe Yeshe Tobden at Lama Tsong Khapa Institute, Italy. For the next 17 years he was based between two monasteries spanning each side of the globe: Nalanda Monastery in France and Thubten Shedrup Ling, Bendigo, Australia.

Chenrezig Institute has been home base again since 2014, but Venerable Tony travels frequently to teach and lead retreats at Tushita in Dharamsala and Kopan Monastery in Nepal. He also teaches at FPMT centres around Australia, including Chenrezig.

In addition to his teaching work, Venerable Tony has also served as a prison chaplain in Victoria.

Students find him a warm, wise and welcoming presence. His previous work and life journey deeply inform his teachings, making them very relatable and relevant. As a previous long-term volunteer at Chenrezig, he understands the community and its people well.

Venerable Tony hopes to spend more time in retreat in the future. 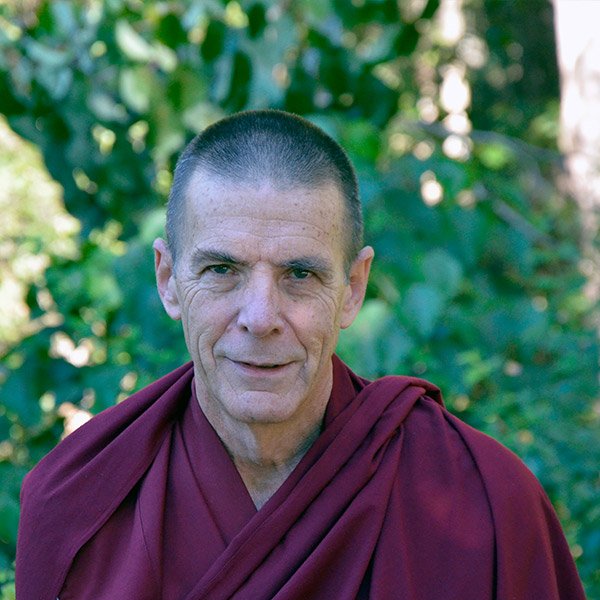 Venerable Pende received full ordination from His Holiness the Dalai Lama in Dharamsala in 1986, having been ordained a novice monk (getsul) by Lama Zopa Rinpoche in 1983. Venerable Pende’s path into Buddhism began in 1979 on the one-month Kopan course led by Lama Thubten Yeshe and Lama Zopa Rinpoche. Back in Australia, he became a founding member of Atisha Centre in Bendigo, Victoria.

With extensive experience working with the dying and those in palliative care, as well as caring for their families, Venerable Pende began to teach widely on the subject in Australia. He then embarked on an overseas teaching tour in 1995, which took him across seven European countries as well as into south-east Asia.

Venerable Pende has been involved with numerous Buddhist projects and organisations through the years. He was the state coordinator for the Australia Tibet Council and was on the National Executive of the ‘The Dalai Lama in Australia’, helping organise several of His Holiness the Dalai Lama’s visits to Bodh Gaya. He was also the national and later international administrator for the Maitreya Project, which involved frequent travel to branches in India, Nepal and South East Asia (Singapore, Hong Kong, Taiwan).

Venerable Pende continues his life-long Dharma interest in death and dying by facilitating regular meetings at Chenrezig for an engaged group of students from all backgrounds, including the caring professions, offering guidance on how to help those facing the end of life.

With unwavering devotion to Lama Zopa Rinpoche and the triple gem, students find Venerable Pende humble, kind, a maker of laughter, and endlessly supportive. He is well known for his great love of all creatures great and small. 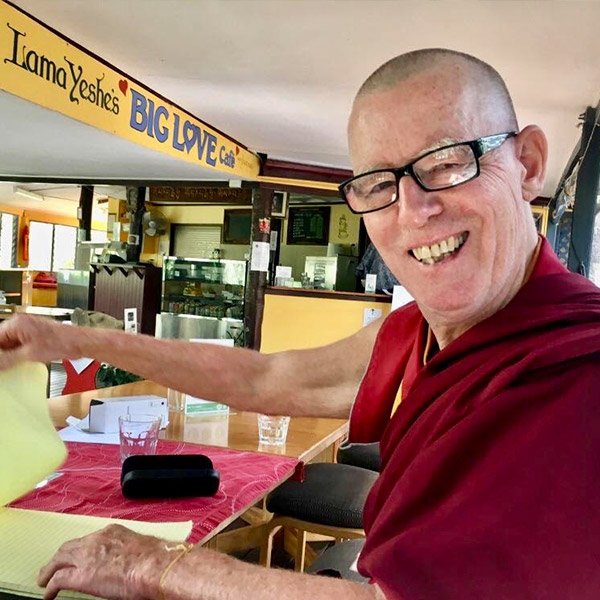