Chenrezig Institute is affiliated with the Foundation for the Preservation of the Mahayana Tradition (FPMT) and follows the Gelug tradition of Tibetan Mahayana Buddhism, as taught by our founding teachers Lama Thubten Yeshe and Lama Thubten Zopa Rinpoche.

This tradition is followed in many of the great monastic universities re-established in southern India after thousands of monks were forced to leave Tibet. It is based on the teachings of Lama Tsongkhapa (also known as Je Rinpoche), a revered Tibetan saint who received teachings on wisdom directly from Manjushri. His most famous text is the Lamrim Chenmo, which extensively outlines the whole graduated path to enlightenment.

The Mahayana tradition, or the bodhisattva path, emphasises the prime importance of the bodhicitta motivation: the intention to attain full enlightenment in order to benefit other beings by bringing them to enlightenment. Mahayana practitioners listen, reflect, and meditate on equanimity, loving kindness and compassion to develop this highest intention, and also to develop the wisdom to realise the nature of reality. Through the practice of the six perfections and deity yoga, they then attain full enlightenment.

As well as more secular and introductory courses, Chenrezig Institute offers general and In-Depth programs related to various texts of the Gelug tradition, including those of Lama Tsongkhapa.

HIS HOLINESS THE DALAI LAMA

His Holiness the Fourteenth Dalai Lama, Tenzin Gyatso, the spiritual leader of Tibet, was born on July 6 1935, to a farming family in the small hamlet of Taktser in Amdo, north-eastern Tibet. At the age of two, he was recognised as the reincarnation of the previous Dalai Lama, Thubten Gyatso.

The Dalai Lamas are believed to be manifestations of Avalokiteshvara, or Chenrezig the Buddha of Compassion, and are the patron deity of Tibet. His Holiness began his monastic education at the age of six, studying the Nalanda tradition. In 1959, His Holiness was forced to escape into exile. Since then, he has been living in Dharamsala, northern India.

His Holiness the Dalai Lama is a man of peace. He has consistently advocated policies of non-violence, even in the face of extreme aggression. In 1989, he was awarded the Nobel Peace Prize “for advocating peaceful solutions based upon tolerance and mutual respect in order to preserve the historical and cultural heritage of his people”.

His Holiness has travelled to and given Buddhist teachings in more than 67 countries. He has received over 150 awards, honorary doctorates and prizes in recognition of his message of peace, non-violence, inter-religious understanding, universal responsibility and compassion. He has also authored or co-authored more than 110 books.

His Holiness has held dialogues with heads of different religions and participated in many events promoting inter-religious harmony and understanding. Since the mid-1980s, His Holiness has developed a dialogue with modern scientists in the fields of psychology, neurobiology, quantum physics and cosmology. This has led to a historic collaboration between Buddhist monks and world-renowned scientists to try to help individuals achieve peace of mind.

In June 2011 Chenrezig Institute was honoured to host a day-long visit from His Holiness, during which he spoke to Sangha and lay students in the meditation hall, blessed the newly finished stupas at the Garden of Enlightenment and spoke to 4,000 guests on the lawns in front of the stupas.

You may listen to the teaching His Holiness gave in the Chenrezig Gompa here:

As suggested by Lama Zopa Rinpoche, we requested His Holiness’ guidance on integrating the teachings into our daily lives in order to make our lives meaningful. His Holiness was very impressed with the depth and breadth of the study program. He reminded us that ritual for ritual’s sake doesn’t mean anything, it doesn’t change our minds, and that we must always keep in sight the end goal – buddhahood. He also spoke on the importance of shamata (calm abiding) as necessary to furthering one’s practice of compassion and wisdom. 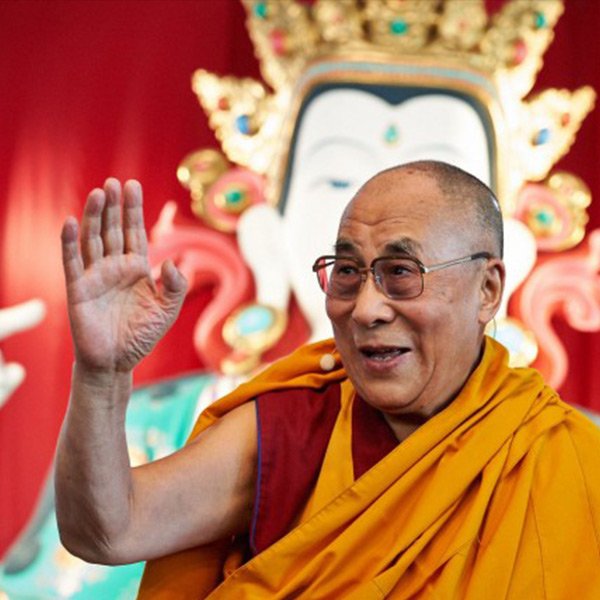 Founder of FPMT and Chenrezig Institute

Lama Thubten Yeshe was born in Tibet in 1935. At the age of six, he entered the great Sera Monastic University, Lhasa, where he studied until 1959, when the Chinese invasion of Tibet forced him into exile in India. Lama Yeshe continued to study and meditate in India until 1967, when, with his chief disciple, Lama Thubten Zopa Rinpoche, he went to Nepal. Two years later he established Kopan Monastery, near Kathmandu, in order to teach Buddhism to Westerners.

In 1974, the Lamas began making annual teaching tours to the West, and as a result of these travels a worldwide network of Buddhist teaching and meditation centres, (including Chenrezig Institute in September 1974), the Foundation for the Preservation of the Mahayana Tradition (FPMT) began to develop.

In 1984, after an intense decade of imparting a wide variety of teachings and establishing one FPMT activity after another, at the age of forty-nine, Lama Yeshe passed away. He was reborn as Ösel Hita Torres, the son of two of Lama’s students, in Spain in 1985 and recognized as the incarnation of Lama Yeshe by His Holiness the Dalai Lama in 1986.

Thousands of pages of Lama’s teachings have been made available as transcripts, books and audio recordings by the Lama Yeshe Wisdom Archive, and most are freely available through the Archive’s website.

View a photo montage on YouTube of Lama Yeshe and Lama Zopa Rinpoche prepared by David Zinn for the 2009 Parliament of World Religions.

Read A Tribute to Lama Yeshe compiled after his death in 1984 and published in Wisdom Magazine.

For more information about Lama’s life, see Lama’s page on the FPMT site. 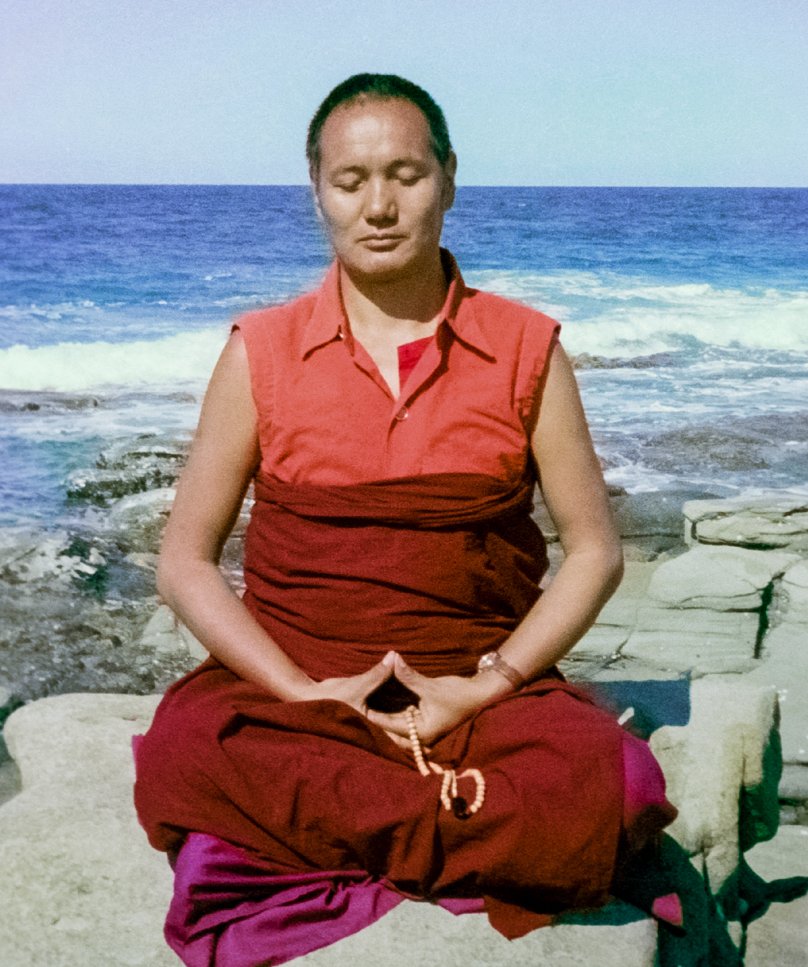 Lama Zopa Rinpoche, born in Thami in the Mount Everest region of Nepal in 1946, was recognised soon afterwards by His Holiness Trulshik Rinpoche and five other lamas as the reincarnation of the great yogi Kunsang Yeshe, the beloved Lawudo Lama.

At the age of ten, Rinpoche went to Tibet and studied and meditated at Domo Geshe Rinpoche’s monastery near Pagri, until the Chinese occupation of Tibet in 1959 forced him to leave Tibet for the safety of India. In the Tibetan refugee camp at Buxa Duar, West Bengal, Rinpoche met Lama Yeshe, who became his teacher. He was taken under Lama Thubten Yeshe’s care there in Buxa Duar in the early 1960’s, and was with him until 1984, when Lama Yeshe passed away.

The Lamas met their first Western student, Zina Rachevsky, in 1967 and traveled with her to Nepal in 1968, where they began teaching more Westerners. Over the next few years they built Kopan and Lawudo Monasteries. In 1971 Lama Zopa Rinpoche gave the first of his famous annual lam-rim retreat courses, which continue at Kopan to this day.

The Foundation for the Preservation of the Mahayana Tradition (FPMT) was established at the end of 1975. Lama Yeshe served as the organization’s spiritual director until he passed away in 1984, at which time Rinpoche took over.

Since then, under Rinpoche’s peerless guidance, the FPMT has continued to flourish. For nearly 40 years, while almost constantly traveling and teaching, he has overseen the spiritual activities of the worldwide network of 160-plus centres, projects and social services that form the FPMT.

Rinpoche has set in motion a host of vast visions for the FPMT organization that will require generations to accomplish. These include many charitable projects and beneficial activities. Among many projects dear to Rinpoche’s heart are the two Maitreya Projects: under Rinpoche’s guidance, FPMT plans to build two large statues of the future Buddha, Maitreya, in Bodhgaya and Kushinagar in India; and The Sera Je Food Fund, which offers three vegetarian meals a day to all 5,000 monks studying at Sera Je Monastery in south India, culminating into a large endowment fund, which now covers all the cost of food for all the monks for as long as the endowment fund remains.

Rinpoche is also utterly dedicated to fulfilling the wishes of His Holiness the Dalai Lama, and holds this to be the utmost priority for the FPMT. 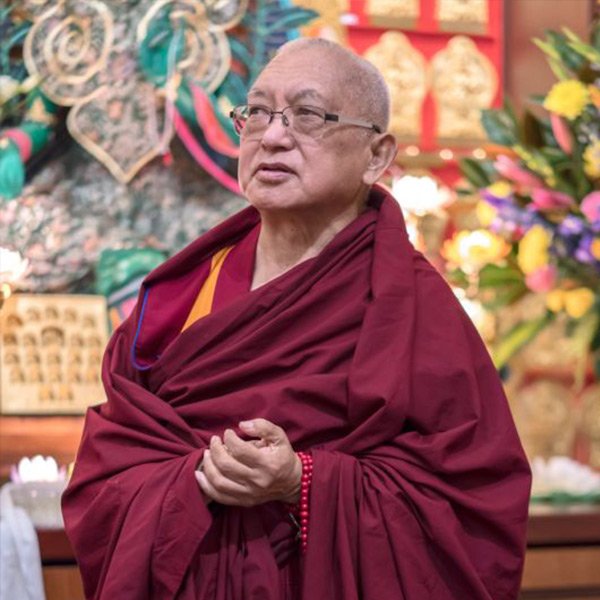 THE FOUNDATION FOR THE PRESERVATION OF THE MAHAYANA TRADITION

The Foundation for the Preservation of the Mahayana Tradition (FPMT) was founded in 1975 by Lama Thubten Yeshe (1935 – 84) and Lama Thubten Zopa Rinpoche. It is an internationally affiliated network of centres, projects, and services all working under the guidance of Lama Zopa Rinpoche for the benefit of all. Chenrezig Institute was one of the first FPMT centres to be established.

This network of metropolitan centres, retreat centres, monasteries, nunneries, publishing services, hospices, and other services and projects functions to achieve the FPMT mission of preserving and spreading Mahayana Buddhism by creating opportunities to listen to, reflect and meditate on, practise, and actualise the unmistaken teachings of the Buddha, based on the Lama Tsongkhapa tradition of Tibet, as taught by Lama Thubten Yeshe and Lama Zopa Rinpoche.

The organisation provides integrated education through which people’s minds and hearts can be transformed to manifest their highest potential for the benefit of others, inspired by an attitude of universal responsibility and service, creating harmonious environments and helping all beings to develop their full potential of infinite wisdom and compassion.

FPMT Inc. is the non-profit religious corporation incorporated in the State of California, USA. FPMT International Office is the headquarters of the FPMT organisation and the corporate office and principal place of business of FPMT Inc.