The term Sangha refers to a spiritual community, a group of at least four fully ordained monks or nuns. Sangha is one of the three jewels of refuge: Buddha, Dharma and Sangha.

Our precious Sangha have been an integral part of Chenrezig Institute from the start, when our first western teacher Canadian nun Anila Ann McNeil moved onto the property at the end of 1974. Lama Yeshe ordained the first group of Sangha at Chenrezig in 1976. Nuns ordained in Nepal and India also made a home in our community where their new way of life could be supported with regular practice and geshe teachings. A thriving Sangha has been a continuous presence at the centre ever since.

Lama Zopa Rinpoche chose the hillside by the gompa as the ideal site for the nunnery. The decision came during a highly auspicious month-long visit in 1987. The renowned yogi Geshe Lama Konchog was resident teacher at the time, and with the two-year-old incarnation of Lama Yeshe, Lama Osel Rinpoche, these holy beings held a puja and blessed the nunnery land. Chenrezig Nuns’ Community was thereby officially established.

Nuns were rarely seen without their tool belts as cabins were renovated and new buildings constructed, but practice and studies were never neglected. This first community of Sangha were initiates of Chenrezig’s renowned Buddhist Studies Program and their learning accomplishments have contributed towards our reputation today as an important centre for Buddhist learning.

Sangha members have taken on various roles in the centre through the years, including director and spiritual program coordinator, and many went on to become teachers and meditation leaders. They are active in FPMT and affiliated organisations and travel to other centres in Australia and overseas to conduct and assist with courses. With a diversity of backgrounds and careers, Sangha also do valuable work in the general community, including counselling, supporting the dying and their families, teaching suicide awareness and prevention, and making hospital and prison visits.

Sangha members gather daily in the gompa to offer pujas and practices to benefit the centre, its members, friends and countless beings. Everyone is welcome to attend. They also take part each week in the 24-hour international Thangtong Gyalpo prayer recital, which is hosted by Chenrezig and organised by the International Mahayana Institute. By connecting online with Sangha worldwide each week and dedicating themselves to this important Dharma event ‘until the pandemic ends’, they are fulfilling Lama Zopa Rinpoche’s wishes to ease the suffering of the world.

Our vibrant, hardworking Sangha members are an essential part of our community and bring a special dimension to the experience of all who visit Chenrezig. Sangha help care for the gompa and advise students in their Buddhist practice as well as in their day to day lives. By leading our popular weekly guided tours they also provide a vital visitor service, being the first point of contact for those new to Buddhism. By bringing so many into contact with the Dharma through sharing our history and information with warmth and generosity, the Sangha inspire countless people to return to Chenrezig to find out more about Buddhism. 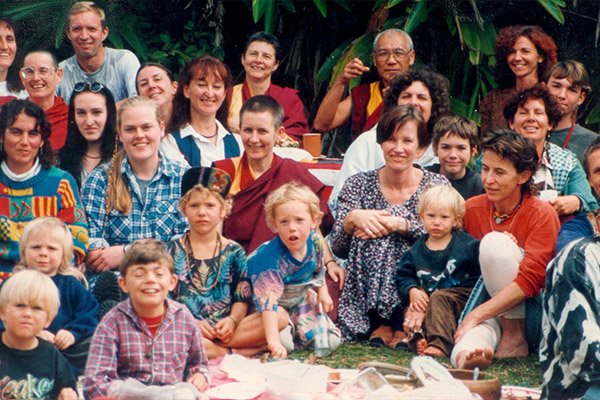 After Lama Yeshe and Lama Zopa Rinpoche’s historic hillside puja, and the consecration of the donated land in September 1974, students from the Diamond Valley meditation course looked to the future of the newly named Chenrezig Institute for Wisdom Culture.

They gathered, they talked, they dreamed, they meditated, they planned. Soon, rough designs began to take shape and, with them, the very beginnings of our community.

At first, out of necessity, people lived off-site. The 160-acre property was bare and unliveable, exposed to the elements with no water or electricity. Students found nearby places to rent, simple homes that offered shelter and rest from their long days of labouring. These pioneers of the community travelled in each day to plot, measure and build basic infrastructure.

The first people to set up home at Chenrezig were Canadian nun Anila Ann McNeil and one keen student, who moved onto the property in late 1974. Gradually more and more hardy folk moved onto the land and work began in earnest to build the meditation hall. When the lamas returned in May 1975, though the building was primitive, they found four walls and a roof to protect them from the elements during teaching.

The community soon developed, with people wanting to live, work and practice together. Simple cabins were built and even some houses. Electricity was connected, a new kitchen built and accommodation completed for the resident lama and visiting teachers. The primitive meditation hall was finally sealed and lined and became much more comfortable when the weather turned foul. This is where the gompa stands today, built around those early structures.

Lama Yeshe encouraged the growth of a diverse dharma community. He saw Chenrezig as a place for Sangha, lay students and families alike; a place for art, music, and much laughter and enjoyment. The natural ebb and flow of life saw couples meet and settle down. Babies were born and families grew. To cater for the growing population, a kindergarten and then a primary school were established in the building still called the Family Centre. Over the years, many children grew and thrived in the unique Chenrezig community, benefiting from early contact with the Dharma and experiencing a freedom unknown to children today.

Today a small, older group of well-established residents still live at the centre. The remaining basic accommodation houses short-term volunteers from home and abroad who take care of our centre and guests and experience our flourishing Tibetan Buddhist community first-hand. For a short while, they are a huge part of our community. Years later, many say they have never forgotten the experience.

Our wider community continues to grow. The Eudlo hills and beyond are populated with dedicated folk who support the centre, and without this widespread community engagement, it would be hard to keep evolving. Our international online community is a relatively recent development, which grows stronger daily. The reach of our traditional Tibetan Mahayana Buddhist teachings goes well beyond the gompa now, with our popular live-streamed and archived online teachings accessed by Dharma students far and wide. Half of our large social media following live outside Australia. What we do is important to them; they, too, feel part of our community, and want to keep in touch with what we do.

So, Chenrezig is now a worldwide community, connecting with one another for a common cause: to see compassion, loving kindness and wisdom grow and be the foundation of our society, thanks to the powerful motivation set by Lama Yeshe and Lama Zopa Rinpoche.

We have immense gratitude for the four original students who started it all off, who are all still actively involved in Buddhism and the FPMT. We are also deeply grateful to the armies of volunteers that have contributed to our growth through the years.

It belongs to everyone.

Volunteers have helped our centre grow from the ground up. From land preparation to developing infrastructure; from shifting earth to detailed landscaping; from building the kitchen to the production of beautifully nutritious meals; from constructing the gompa to caring for its precious holy objects; volunteers are a massive part of our community.

They provide support to our teachers and guests, care for important resources in the archives and library, and help our spiritual program thrive. They work in the kitchen, gardens and grounds and turn their hands to whatever task is needed.

You too can become part of this beautiful tradition.

view volunteer page
back to about